May 06, 2020
Fidalma Lisio and the Art of Silk
A combative woman with a firm will to preserve and hand down the Art of Silk. A "mission" that brought the Giuseppe Lisio's manufactory in the 3rd Millennium.

Fidalma Lisio, born in Florence on 18 August 1910, daughter of Giuseppe Lisio and Maria Rosa Olivieri, is a significant example of how a woman can to gain a foothold in the business world, driven by determination and passion and above all by the awareness of carrying out an important role, a source of human growth, both her own and that of others.

Educated at Sacred Heart College in Florence, she followed her father's activity [1], together with her mother, sharing all its successes and struggles, while dedicating her days to the care of her family. The years followed one after the other for Fidalma as she consolidated her knowledge of languages, also through her father's business correspondence.

The outbreak of the Second World War left a deep wound in her life which culminated in 1943, the year not only of the bombing of Milan which seriously damaged Palazzo Lisio [2], but also of the death of her father, Giuseppe, on 16 April in their home in San Michele di Pagana, Rapallo, where the whole family had taken refuge. 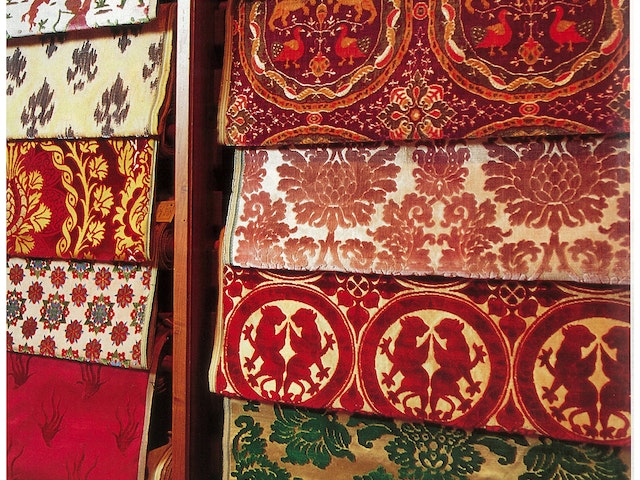 After the end of the war, the Arte della Seta Lisio shops and manufactory were reopened by her nephew Teodoro Olivieri who, however, proved uncertain about continuing the business which his uncle had started. When in 1952 Fidalma decided to take over the reins of her father's business, she had little experience in management but was supported by a strong battling spirit, a legacy of her Abruzzese father, and she "threw herself" into this enterprise as "a mission to be accomplished" [3].

A great admirer of Mastro Lisio's work, she embraced her father's philosophy of life entirely dedicated to the preservation and handing down of the Art of Silk, through the re-proposal of ancient hand-weaving techniques and design modules inspired by ancient textile examples and famous Renaissance paintings. 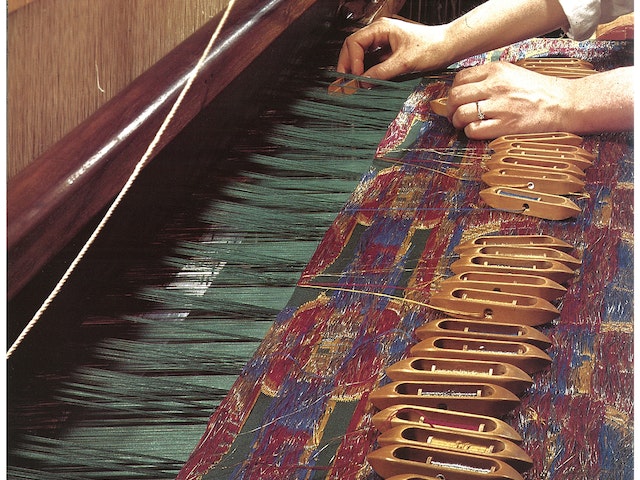 Fidalma studied, met with experts in the field, asked for advice and clarifications, and as her first f management action, planned the return of the manufactory to her beloved Florence. The year 1954 marked the start-up of the Florentine activity with the renting of several rooms in Palazzo Guicciardini in Via Ghibellina where on St. Joseph's Day, a weaver and a worker who came from Milan, began to assemble a hand loom for velvets. Gradually the production took shape with the addition of another loom and a second weaver; following, the equipment increased, and the number of manual looms rose to seven.

In the meantime, a very important date deserves great attention and prominence: 1956, the year that marked the fiftieth anniversary of the foundation of the Arte della Seta Lisio, which Fidalma decided to solemnly celebrate by publishing a book in three languages tracing the work of her father and his creations.

Having laid the groundwork for the permanent transfer of the business to Florence, Fidalma searched for suitable premises to house the entire manufactory which she eventually found and purchased in 1958 near Ponte a Ema, the Podere Fontenuova in Via Benedetto Fortini [4].

A deep-seated Christian faith animated all her work, carried out under the banner of "the conviction that man must consider the things he legitimately possesses not only as his own, but as shared, in the sense that they may benefit not only him but also others". 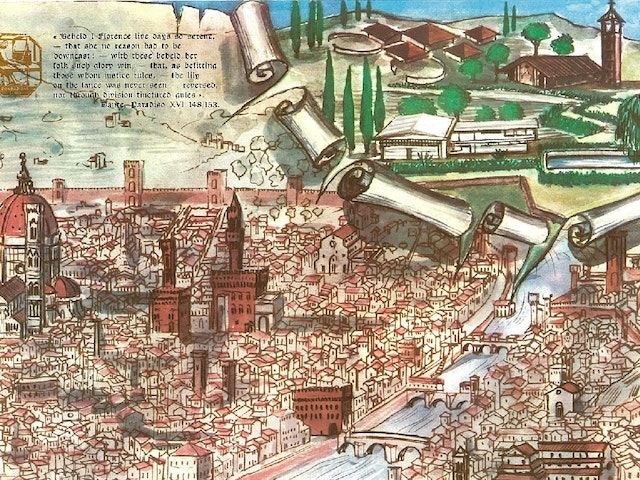 It was therefore with this spirit that she not only conceived a new production site, but also designed a series of premises suited to all the material, social and moral needs, therefore intended for the well-being of the entire community consisting of the employees and their families.

This is how the fabric, canteen, weaving school, showroom of art textiles, childcare centre, church, and houses were all designed.

A study carried out during an academic course of Industrial Archaeology at the University of Pisa, identified in this nucleus, the last known worker village in Italy [5].

It is also important to emphasise how her attention to employees and the protection of their personal needs led Fidalma to introduce changes in the working hours which were innovative for those times:

"The reduction of working hours with two breaks mid-morning and mid-afternoon, with Saturday completely free that preceded the current legal provisions by several years, should allow a moment of relaxation and the opportunity to devote time to family and leisure activities"[6].

Around this small community a family atmosphere was thus created, animated by many moments of sharing with recreational initiatives, trips, events related to anniversaries both personal of the individual families and of the community, but above all enlivened by the sympathy, intelligence and sensitivity [7] of the "Signorina" - as many still call and remember her today.

Just as Giuseppe Lisio made the excellent quality of his fabrics his trademark, so his daughter Fidalma took the same great care in the choice of yarns and dyes, in the design and technical execution, and in the painstaking reproduction of the originals.

Her customers were numerous and all prestigious, covering different areas and uses: the sacred ones, for example with the chasubles for the Vatican and vestments for the simulacrum of the Black Virgin of the Sanctuary of Einsiedeln in Switzerland, or the parade for the Cathedral of Santa Maria del Fiore in Florence, the remaking of ancient fabrics for the restoration of the cultural heritage such as the niche of Santa Lucia in the Basilica of Syracuse, gowns for royalty, costumes for the cinema or historical reconstructions, and furnishing accessories for private residences.

In the meantime, Fidalma became convinced that in the aim of handing down the Arte della Seta it would have been necessary to set up an institution precisely for this purpose.

Thus, on 3 November 1971, the Fondazione Arte della Seta Lisio was established, the Statute of which was approved by a Decree of the President of the Republic [8].

The Foundation's mission has therefore been carried on since its incorporation according to three directives that intersect in their path: manufacturing, teaching and cultural activities. 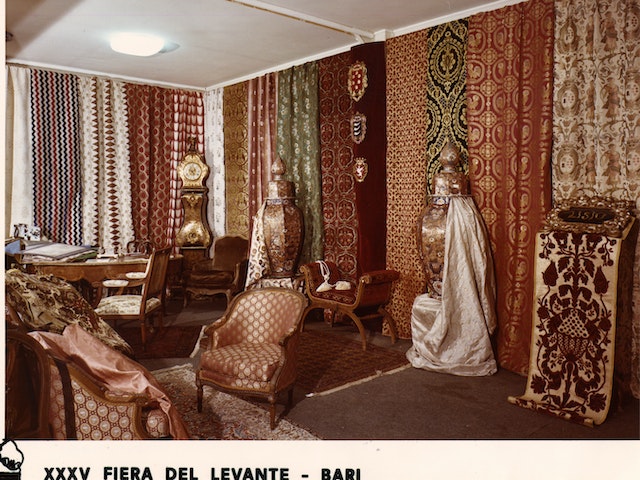 With the first, the fabrics still created on Jacquard handlooms from the ancient manufactory founded by Giuseppe Lisio include plain, cut, uncut or ciselé velvets, brocading-weft and pattern-weft fabrics, and lampas.

The repertoire ranges from the original creations put into production by Lisio from the beginning of the twentieth century onwards, to special projects studied and designed exclusively for the clientele. In addition to the exclusivity and excellence of the products, a characteristic that distinguishes the fabrics woven by the Lisio Foundation is its experimentation. In other words, thanks to these special projects, forgotten ancient techniques are put back into production, unusual yarns and materials are used and innovative design pathways are undertaken. 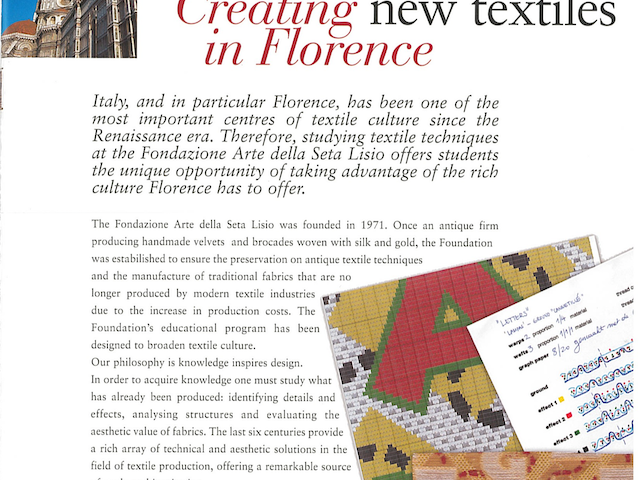 The research and implementation of old and obsolete weaving techniques are also stimulated by the lively teaching activity that entails the activation of courses ranging from basic to highly specialised levels [9].

The new generations can learn the manual weaving methods, from the simplest to more complex ones, which are at the basis of even the most modern production systems, experimenting all the steps of weaving a fabric, from the creation of the design and the manufacturing technique, to the preparation of the loom and the weaving itself. 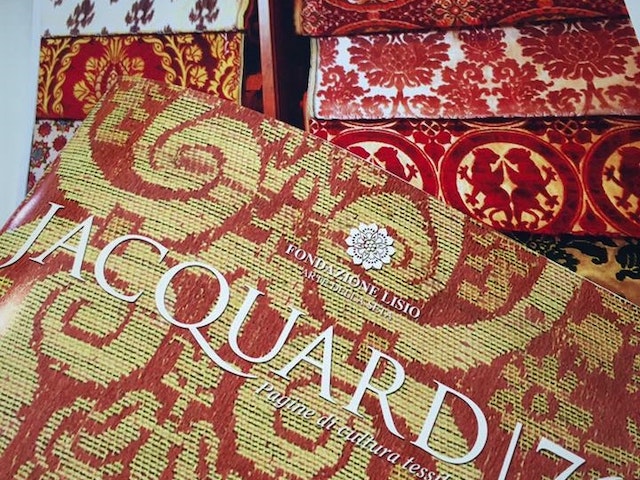 Finally, the cultural activities are developed on the one hand in the search for data and testimonies to the Lisio production from its origins to the present day for enriching the history of the manufactory and its evolution, and on the other, in the promotion of studies of ancient and contemporary textiles through the six-monthly magazine 'Jacquard. Pagine di cultura tessile' published by the Foundation ever since 1989.

These are the three spirits that enliven the Foundation, strongly desired and supported by Fidalma Lisio, who saw in it the materialisation of her life’s project in continuity with her father's ideals.

The Fondazione Lisio, the direct legacy of Fidalma, who died in 2001, continues the work undertaken by its founder by instilling the same enthusiasm and spirit of enterprise in its activities, welcoming day after day every challenge that presents itself as an opportunity for human and professional growth.

[1] In 1906 Giuseppe Lisio founded the Arte della Seta manufactory in Florence and opened the shop in Via de' Fossi. Later he opened shops in Rome in Via Sistina (1911) and Milan in Via Manzoni (1924); towards the end of the 1920s he moved the workshop to Milan in a building he had erected to serve both as their home and the weaving mill. (1906-2006 Cento anni di tessuti Lisio, curated by Paola Marabelli and Serena Venturi, Prato 2006).

[2]  Production stopped and all the shops closed.

[3] “…I made an in-depth evaluation of the negative side that left me in doubt, in throwing myself into this venture, i.e., my no longer young age and total inexperience in the world of factory work and sales …but I felt I had a mission to accomplish so I followed the call…” F.Lisio, Conferenza alle ex alunne del Sacro Cuore, September 1981, in “A Fidalma Lisio” file attached to “Jacquard”, no. 46, 2001, p. 4.

[4] October 7, 1958, laying of the first stone of the building that was known as "la fabbrica"; July 24, 1959, inauguration of the Salone dei Telai; the workshop in Milan closed, all the looms and equipment (such as the warping and mechanical winding machines) were transferred to the new complex in Florence; March 19, 1960, inauguration of the completed manufactory and laying of the first stone of the church dedicated to Santa Maria della Seta.

[9] The Fondazione Lisio now boasts another important title: it has obtained Accreditation from the Region of Tuscany as a Training Body (Official Bulletin of the Region of Tuscany no. 29 - 18 July 2012); in this way its training courses organised and activated with organic teaching plans according to the regional directives, are officially recognised. 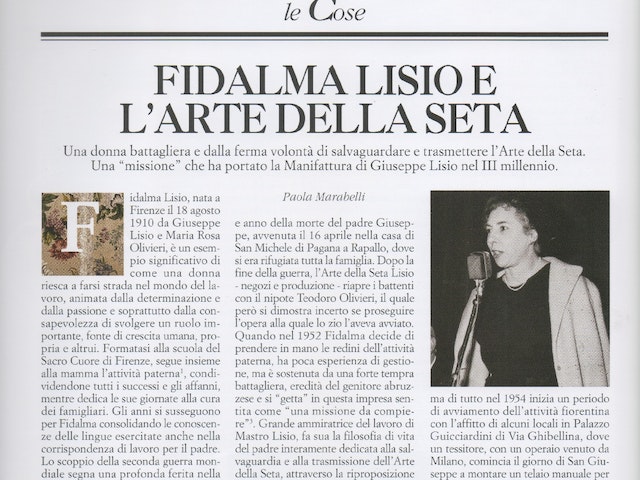 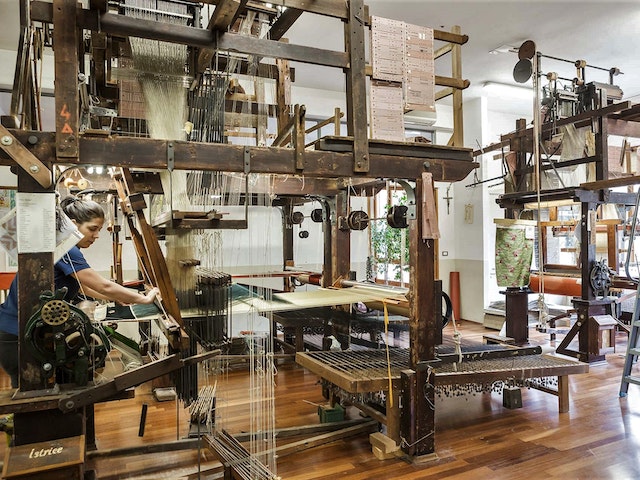 At the Heart of the Lisio Tradition

Fidalma Lisio’s aspirations took concrete form in 1971 when she established Fondazione Arte della Seta Lisio. Desirous of safeguarding her father’s legacy and continuing the activity he had launched, she took over the ancient manufactory, with its handlooms and the technical drawings, with the precise intent of continuing to propose the ancient production techniques before they could disappear forever. She flanked her enterprise with a qualified art school, which soon was training students from all over the world.