Velvets and Brocades
Over the years, Giuseppe Lisio drew on his vast collection of samples of ancient fabrics to create new ones, working with the draughtsmen to whom he entrusted the task of plotting and drawing the technical ‘messe in carta’ drawings for preparing the looms, he designed textiles aligned with the taste of the times, products capable of meeting the demands of the market and above all of expressing the Lisio philosophy of defending high-level Italian style.

The revival of the Renaissance style conbined with the Lisio's fabrics preciousness was the winning strategy that allowed Lisio to satisfy the taste of both Italian and foreign customers.

Our Manufacture continues to draw from the historical archive, proposing new color and structure experiments, creating each time absolutely unique and contemporary fabrics.

Here a selection of patterns woven by Giuseppe Lisio in the first decades of the 20th century: 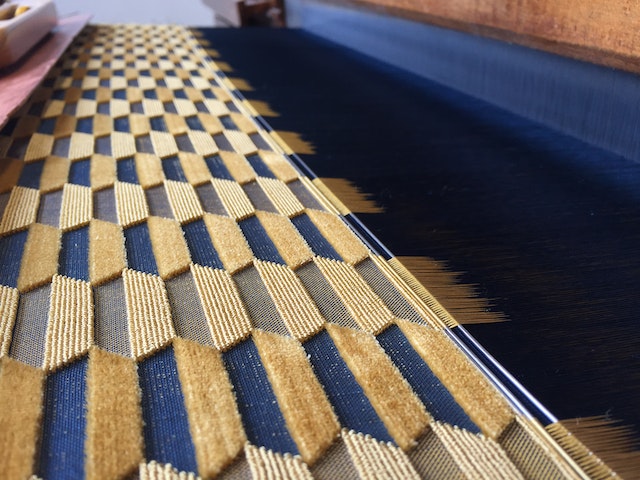 A simple but exceedingly elegant design that has traversed the centuries without losing anything of its allure: the motif is ‘borrowed’ from an 16th-century damask; the ‘Scaccato’ velvet proposes the same pairing of two shades of the same colour seen in the original sample. 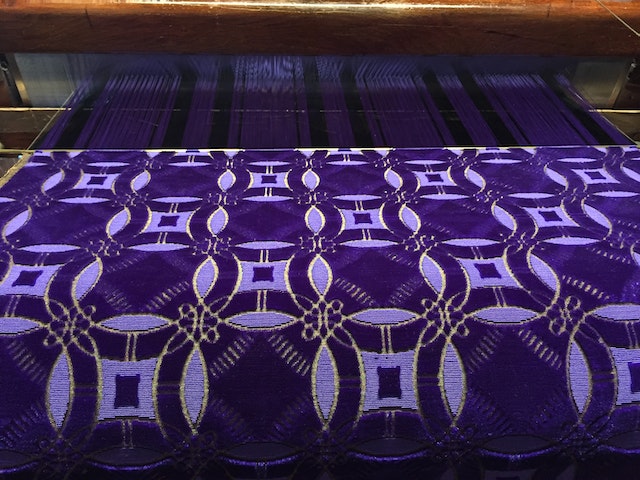 Giuseppe Lisio’s ‘San Marco’ velvet, with its complex geometric design based on interlocking circular figures  taken from a floor mosaic in one of the world’s most beautiful churches – Saint Mark’s Cathedral  in Venice – was woven for the first time in 1926 ca. Produced by the sophisticated ciselé technique, which juxtaposes the different lights of looped and cut piles, it is ideal for exalting the forms of modern and contemporary furnishings. 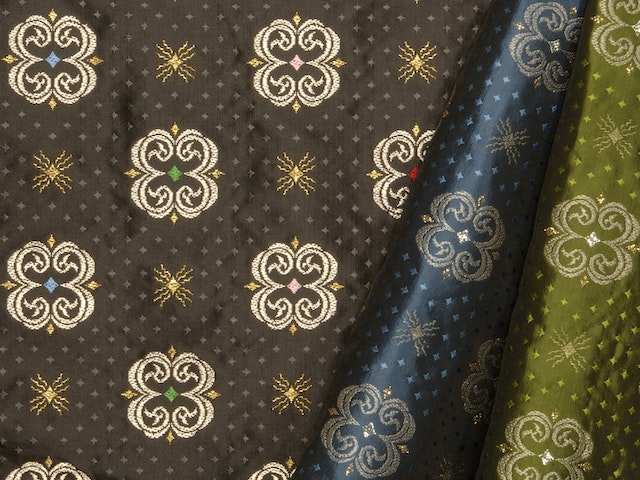 This brocade was produced for the first time in the late 1930s. Its inspiration traces back to the mantle of the Virgin in Agnolo Gaddi’s Coronation of the Virgin (at the National Gallery of London). Fondazione Lisio still weaves this fabric, with its simple, elegant design whose efficacy derives from the colour variations of the brocaded wefts and the luminous effects of the background, on its hand-operated looms. 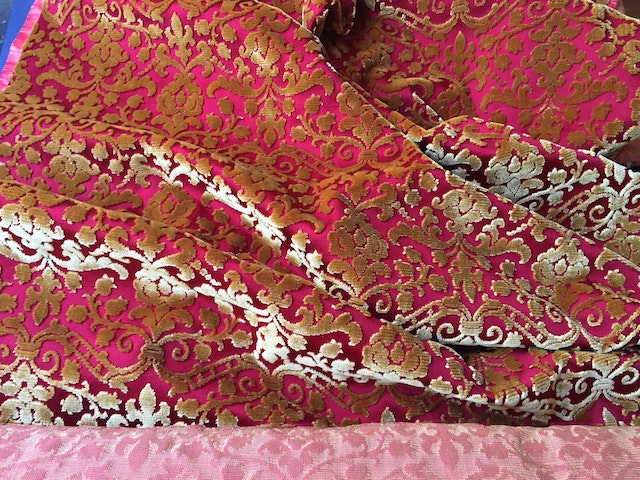 The elegance of this velvet produced by Lisio beginning in 1928 ca. derives from the perfect harmony of the various elements of the design with each other and with the ground. The motifs are placed horizontally as was characteristic of the fabrics of the first half of the 17th century: some of these, such as the stippled, sinuous  trunks, belong to the late 16th-century repertory while others, like the small cornucopias or the stylised lilies, are in full-blown Baroque style. 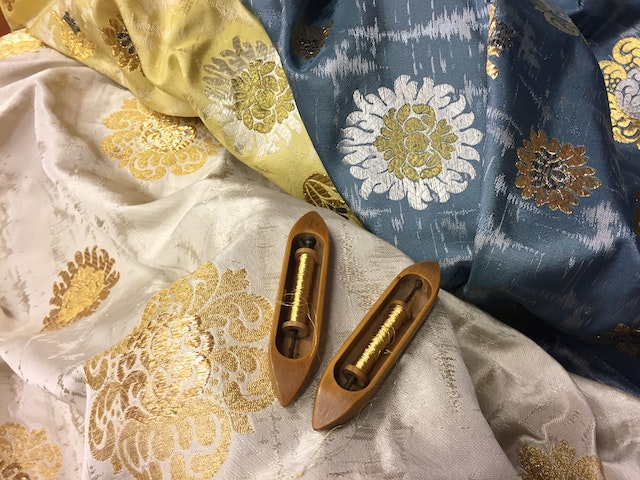 Production of the ‘Veronese’ fabric, which proposes both the technique and the design of a mid-17th century sample, began in 1915 ca. From the 17th-century model, taken from Paolo Veronese’s painting of Justice in Palazzo Ducale in Venice, Lisio faithfully transcribed both the compositive layout and the larger and smaller elements, placed on the diagonal to lend movement to the pattern. The changes made were enlargement of the ratio of the design, delineating the motifs only with brocading in two types of gold and silver, and use floats of the ground weft and a lancé effect in substitution of the lamella that covered the ground and produced plays of light with to obtain a very successful iridescent effect. 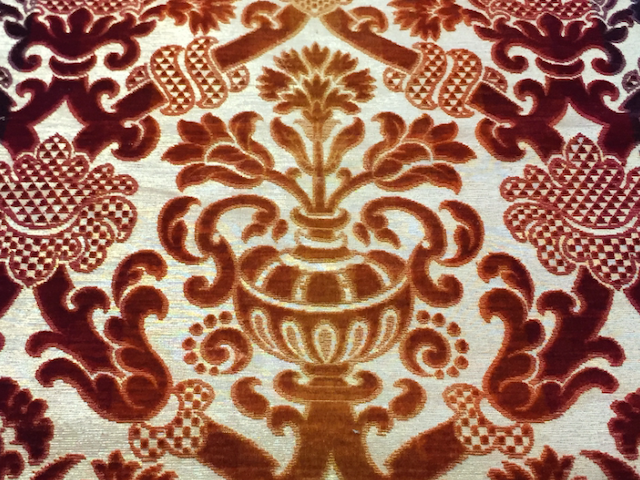 The design of this velvet, woven in two variants, faithfully reproduces a typical 16th-century velvet produced in Florence for an entire century, beginning in the mid-1500s.  The ‘Palio I’ velvet was set up on the loom by Giuseppe Lisio for the first time in 1925. 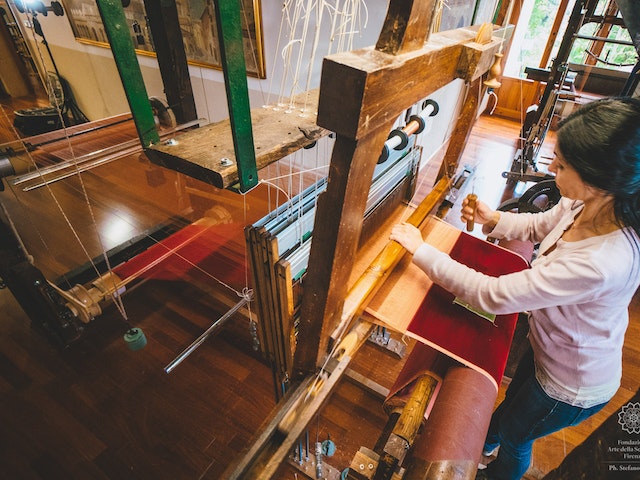 Our Hand Weaving in silk

We weave our fabrics only on hand-operated Jacquard looms. The weaver’s hand is fundamental to fabric creation: punctilious attention to design, selection of the precious yarns and precise workmanship are the elements that set our manufactory apart and make all our products exclusive examples of artisan excellence. 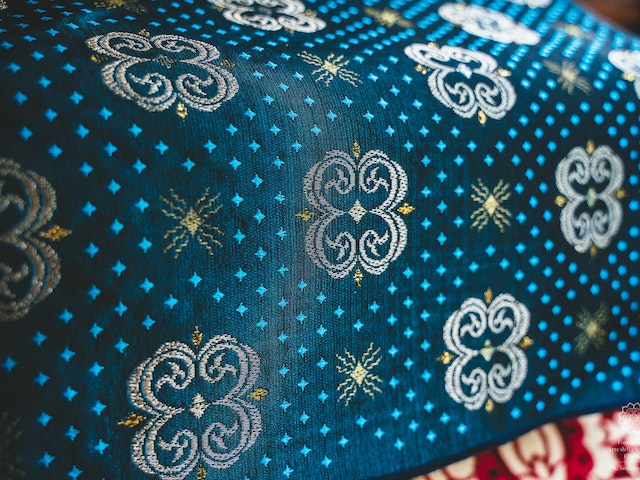 where you can find our fine fabrics

Our fine fabrics are available abroad at "Turnell & Gigon", our exclusive distributor for United Kindom, "Catherine Mabire" our agent in France," WWTS" our agents in Russia and "Marcello Boss" our agent in United States.